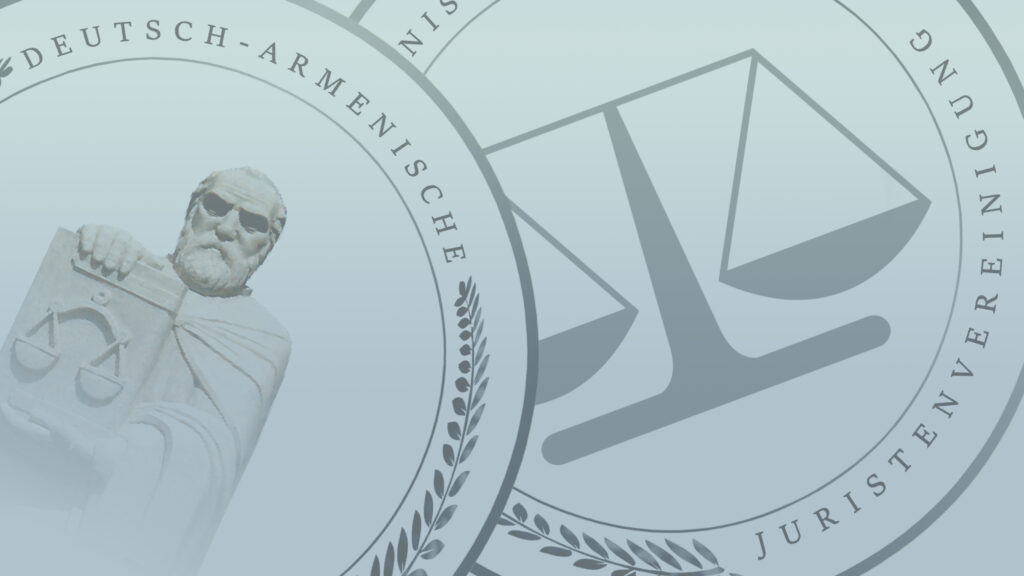 Those evacuated or fled from the Republic of Artsakh (Nagorno-Karabakh) due to the armed conflict urgently need humanitarian aid.

The German-Armenian Lawyers‘ Association has been looking anxiously to Artsakh (Nagorno-Karabakh) since the beginning of the armed conflict on September 27, 2020.

Founded by our statute as a non-profit association, we consider it our duty not only to point out human rights violations, war crimes and violations of international law by the Azerbaijani armed forces, but also the practical consequences of the war and the trilateral announcement of 9 November 2020 for the Republic of Artsakh.

In our reports, we have repeatedly and in detail pointed out that the people of the Republic of Artsakh are threatened with expulsion and extermination.[1] According to the 2015 census, 146,260 people were living in the Republic of Artsakh, its capital Stepanakert and its 7 regions or provinces.[2] More than 50,000 people live in the capital itself.

The declaration made on 9 November 2020 put an end to the war activities, but Artsakh had to cede 80 per cent of the original territory to Azerbaijan. As a result, the obvious question arises as to how, when and under what conditions, the Armenians who had fled to Azerbaijan are to return to these territories now partially ceded to Azerbaijan, if security cannot be guaranteed in those very territories.

In this context, there are three different problem areas for returning evacuees or fugitives:

1) There are those who have left their homes in the territories of the former Nagorno-Karabakh Autonomous Oblast (NKAO), in particular in the regions of Hadrut and Shushi and parts of the regions of Martuni and Martakert, and who are forced to return to the territories of the Republic of Azerbaijan (about 30,000 inhabitants) due to new circumstances.

2) There are those who have left their homes in the border areas of the former NKAO, particularly in the Kelbajar, Lachin, Zangelan and Kubatli regions, which will be under the control of the Republic of Azerbaijan from 1 December 2020 (about 12,000 inhabitants).

3) There are those persons who have been evacuated from the regions under the control of the Republic of Artsakh (Stepanakert, Askeran, Martuni and Martakert). These evacuated groups do not face the problem of having to go to Azerbaijani land, but they can only return to completely destroyed areas because they have been heavily bombed (about 30-40,000 inhabitants).

This representation already demonstrates the complexity of the current situation. However it does not stop at this point, but continues to manifest itself in the question of the status of „evacuees“ or „fugitives“ in order to receive the national or international humanitarian aid that they urgently need. The exceptional problem is reflected in the different control of the territories either by the Republic of Azerbaijan or by the Armenians. The Armenian Artsakh, who had fled at the time, left their country at the time of Armenian control. This would deny them the status of „refugee“ under the 1951 Geneva Convention on Refugees, since one of the basic requirements for the recognition of refugee status is residence outside the country of nationality. Although the Armenians of Artsakh crossed the national borders of the Republic of Armenia at the time of the war, the Armenians of Artsakh have by way of exception, Armenian citizenship,[5] so that they can only be declared internally displaced persons. As a result, the Republic of Armenia would be responsible for their security or humanitarian assistance in accordance with Guideline 3 of the Guiding Principles on Internal Displacement.

As the transfer of the Artsakh Territories to Azerbaijan is taking place as a result of the announcement made, the question arises as to whether this very status as an internally displaced person will change to that of a refugee in areas under Azerbaijani control. For on the one hand, the Artsakh Armenians who have fled have now crossed the state border even more clearly as a result of the abandonment of Armenian control and on the other hand, they would have to return to areas where they do not have citizenship. Under the various problem areas referred to above the following would result: the groups of persons referred to in points 1 and 2 could be defined as refugees within the meaning of the Geneva Refugee Convention, while the Armenians who fled in group 3 would continue to receive only the status of internally displaced persons. The UNHCR could thus take on the protection and humanitarian aid of the first and second groups, but not of the third. This would make the whole principle ad absurdum, so that the UNHCR could also be called upon to ensure security and provide immediate humanitarian aid in accordance with the Refugee Convention.

Even with the restrictive interpretation of all Artsakh Armenians as internally displaced persons, the UNHCR as other appropriate actor“ and other international humanitarian organizations would have the right to offer their international assistance in accordance with Guideline 25, paragraph 2, of the Guiding Principles on Internal Displacement.

In view of the current difficult and tense situation, the cities and towns that have been bombed, the many dead and the coming cold, evacuees and fugitives are faced with an acute emergency situation which the Republic of Armenia, as the security guarantor of the people of the Republic of Artsakh, cannot overcome on its own.

As explained in detail above the UNHCR would clearly have to assume the mandate for certain districts and provide direct humanitarian assistance to Armenia. It should also be pointed out once again that this particular conflict is not a national one, but an international one and internally displaced persons cannot be defined as classic internally displaced persons within a territory.

It should also be noted that even in cases of clear internal displacement, the United Nations High Commissioner for Refugees has taken on the task of providing support and assistance.[6] This is not only justified by the reference to paragraph 9 of the 1950 Statute of the Office of the UNHCR, which states that

“The High Commissioner shall engage in such additional activities, including repatriation and resettlement, …”

“takes   note   of   the   current   activities   of   the   Office   of   the   High   Commissioner related to protection of and assistance to internally displaced persons, including in the context of inter-agency arrangements in this field…“[7]

In addition, UN General Assembly Resolutions 46/182 and 58/114 on strengthening the coordination of UN humanitarian emergency assistance point out that humanity, neutrality, impartiality and independence are to be regarded as principles for worldwide humanitarian aid.

These principles were also confirmed at European level by the European Parliament resolution of 14 November 2007 on a European Consensus on Humanitarian Aid (2007/2139(INI)).

Germany has also implemented the principles of humanitarian aid as part of its foreign policy strategy:

„The humanitarian aid of the Federal Foreign Office, which is committed to humanitarian principles, is guided in its implementation by three principles of design: a need-based approach, subsidiarity and damage prevention. The decisive criterion for providing aid is humanitarian need. In addition, aid is granted on a subsidiary basis, i.e. only where the government of the affected state or other actors themselves cannot or do not want to do so sufficiently.”

On the basis of the above explanations and the presentation of the complexity of this conflict, we call not only on the German Federal Government, but also on non-governmental organisations, humanitarian organizations and the High Commissioner for Refugees, both the people of the Republic of Arstakh and the Republic of Armenia, where the majority of refugees are seeking protection, to provide assistance.

[1]  See The Current Reports of the German-Armenian Lawyers‘ Association on the War for the Republic of Artsakh, version 27.10.2020, p. 7, under https://dearjv.de/onewebmedia/C_Fassung%2027.10_LaufendeBerichte_DEARJV.pdf.

[6] Georgia, Bosnia, Afghanistan and Pakistan are only some of the crisis areas in which the UNHCR has been active without a clear mandate.